Unlike any other watch

A contemporary, yet timeless form inspired by precision and purpose.
We call it «Bólido», Spanish for meteor.
One that nimbly crosses the cosmos of the somewhat immovable fixed stars of established watch-brands.

«To create a new breed of watch to match our perception of architectural design and functionality. Manufactured in Switzerland at an un-Swiss price» 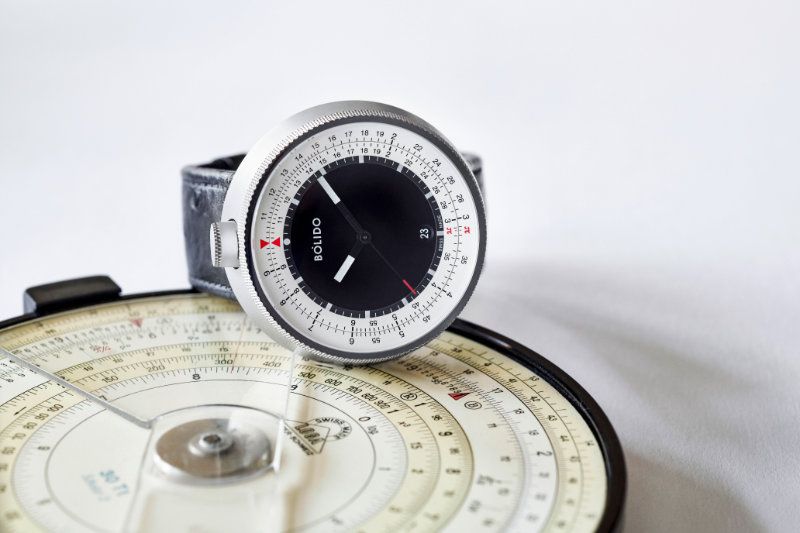 In 2016, Pierre Nobs –retired watch-entrepreneur and engineer by profession– became aware of the latent problems in connection with the new laws concerning the use of “Swiss made”. Strong lobbying of the leading luxury brands prompted legislation to newly include housing components in the minimum of 60% of the total manufacturing value, to qualify for the designation “Swiss made”.
As the majority of the Swiss case production had migrated to Asia over the years for cost reasons, manufacturers in the middle and lower price segments got into serious difficulties.
Nobs remembered that the most cost-effective manufacturing method has always been automatic precision lathing –a popular and competitive industry in Switzerland – and began the search for a suitable case form.
The linear lathing process producing only very banal shapes, he asked Simon Husslein, a well-known designer, to think about this dilemma. Husslein came up with the idea of adding to the lathing process a second axis, which in a very simple way created an asymmetrical, absolutely archetypical form; it was the birth of Bólido.
The two protagonists used crowdfunding to finance the project and founded the company Bólido Watch Inc. in 2017, which since has been marketing «100% Swiss Made watches» based on this clear and modern design with growing success.

Only few watch brands have defied the challenges of incorporating a slide-ruler disk to their timepieces. To achieve accurate performance, this demands a particularly high level of mechanical precision in the case-making. 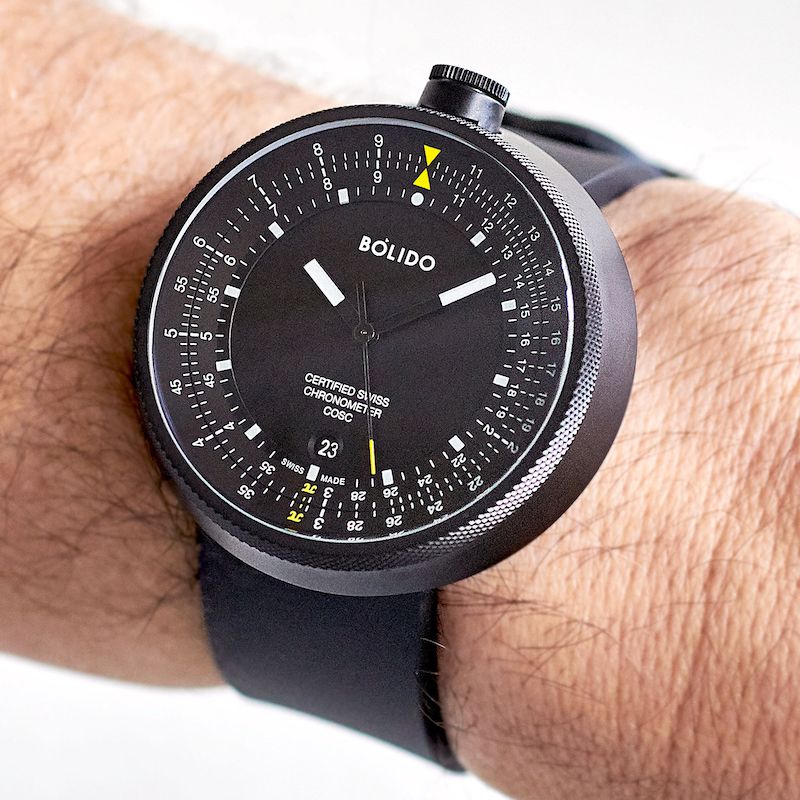 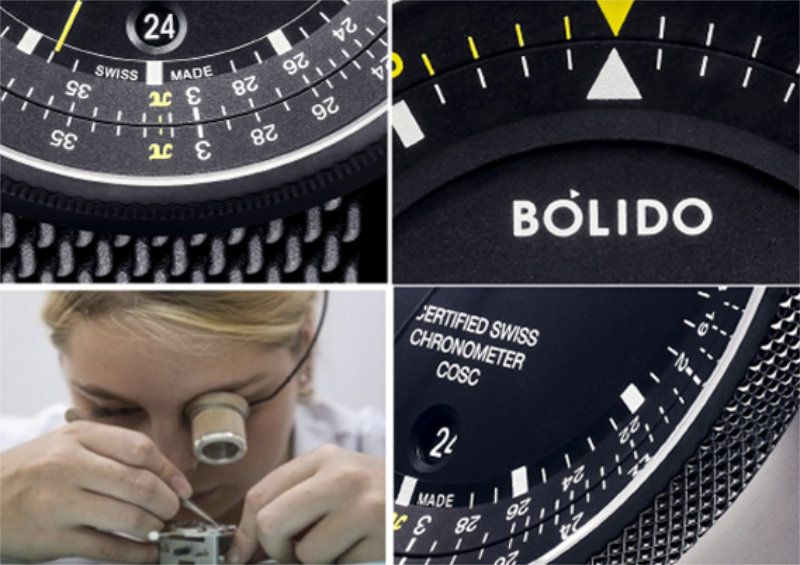 Bólido timepieces are individually handmade by skilled Swiss watchmakers in super-clean, modern facilities located in the peaceful hills of the Swiss Jura. 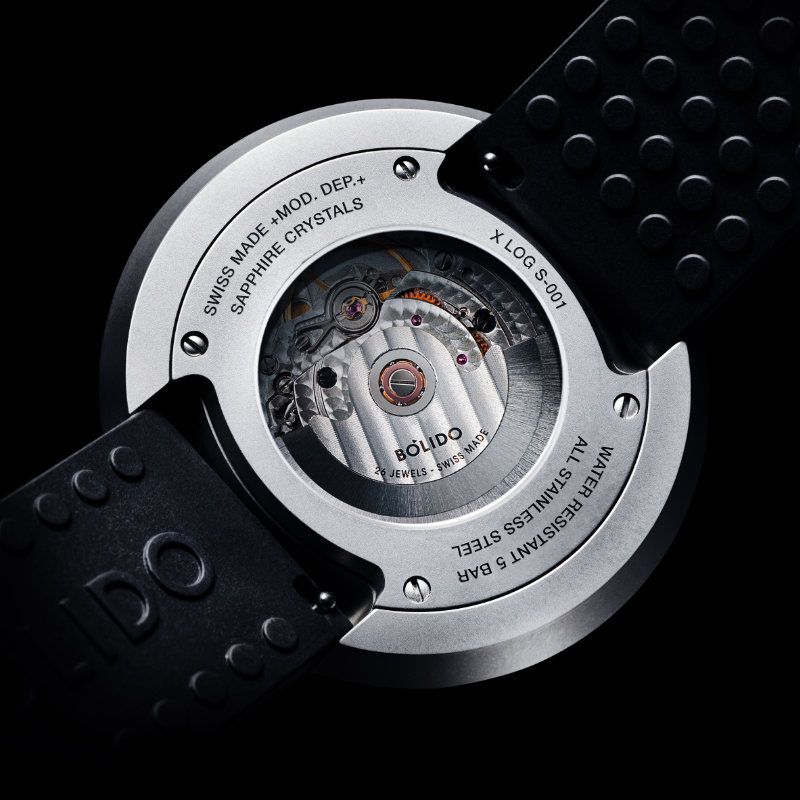 If a mechanical Swiss watch fulfils the best basic technical requirements, there is one ultimate possibility to increase its value: the neutral certification by the independent COSC (Contrôle Officiel Suisse des Chronomètres) as an official chronometer.

This incorruptible certification is only awarded to a movement that has successfully undergone a 14-day inspection sequence of precision and reliability at high and low temperatures in five different positions. (All Bólido movements are already tested in an identical manner during production).
The COSC certification is the highest quality rating attainable for a Swiss timepiece; only 6% of all Swiss watch production bears the legally protected “Certified Swiss Chronometer COSC” dial imprint.
The COSC identification number on the movement is engraved on both the movement chassis and the case back to prove authenticity, and must correspond to the original COSC certificate enclosed with the watch. Only then may the dial bear the COSC designation. 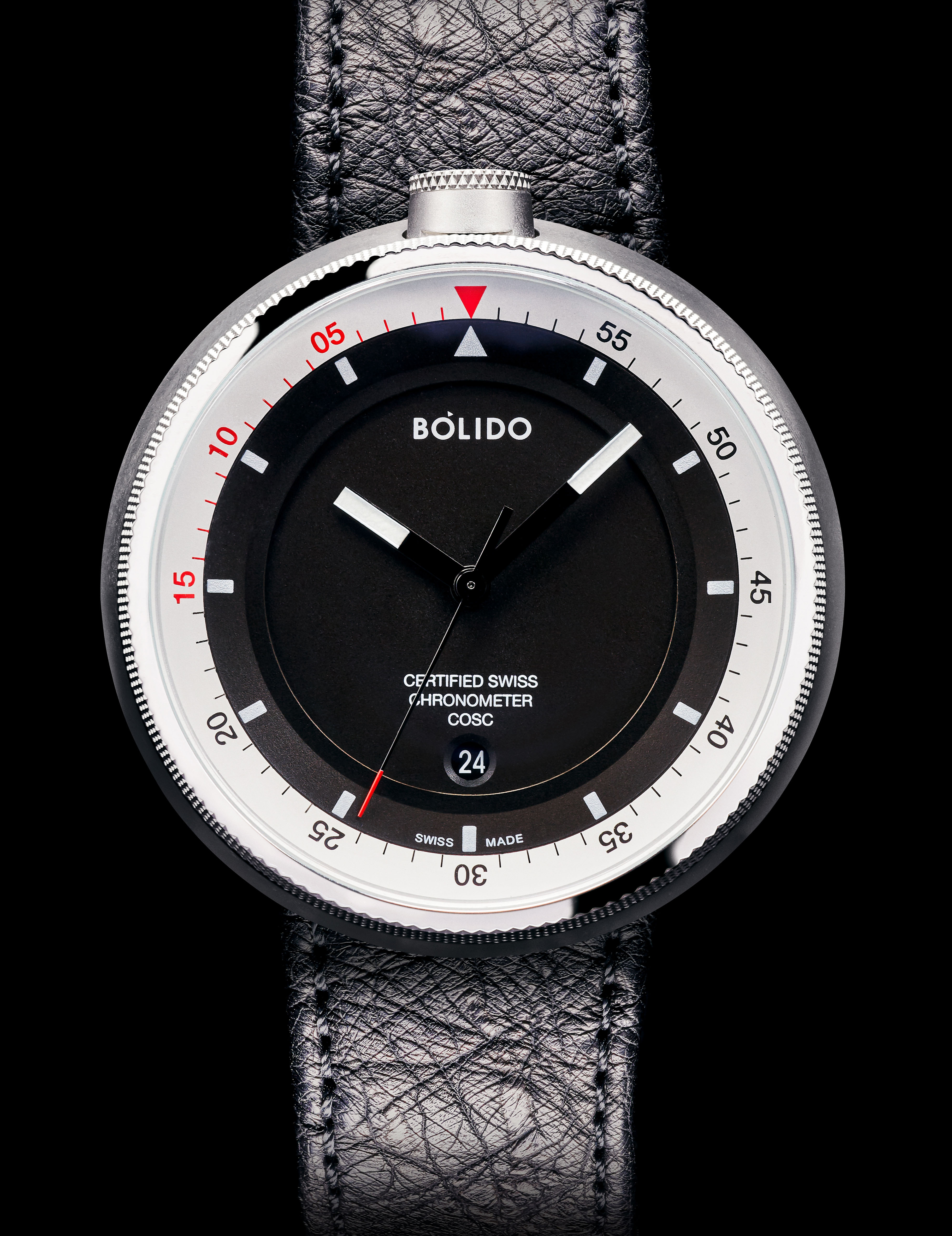 With identical construction as the LOG, the Bólido X CD has a scale to show a previously chosen time, think of parking meter, meetings, diving, etc.
Practical and intuitively fast: Turn the scale so that a duration of your choice coincides with the position of the minute hand; the arrow on the bezel now indicates the end of the countdown. The last 15 minutes (these are particularly important, for example in sailing regattas) are highlighted in color. 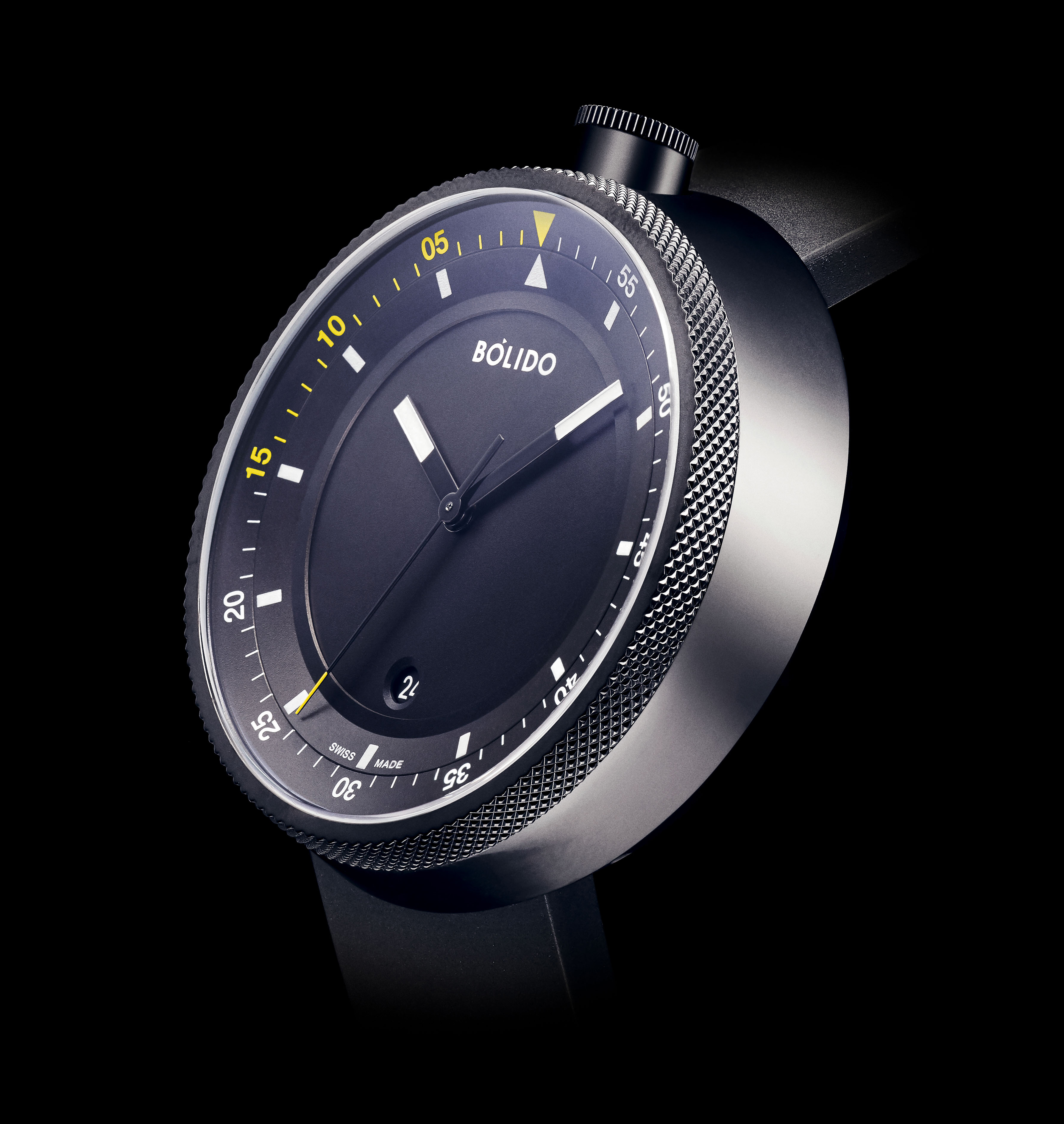 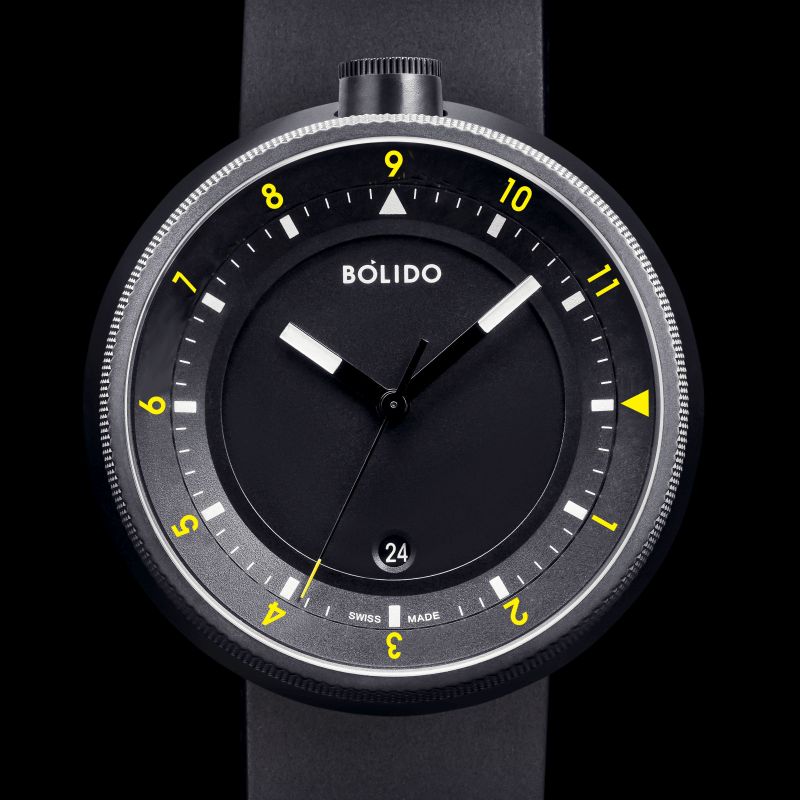 The understated scale of the GMT model is remarkably versatile. It allows globetrotters to set a second time zone, but also serves as a continuous hour counter and golfers can discreetly count their strokes on this elegant timepiece. (Available spring 2021) 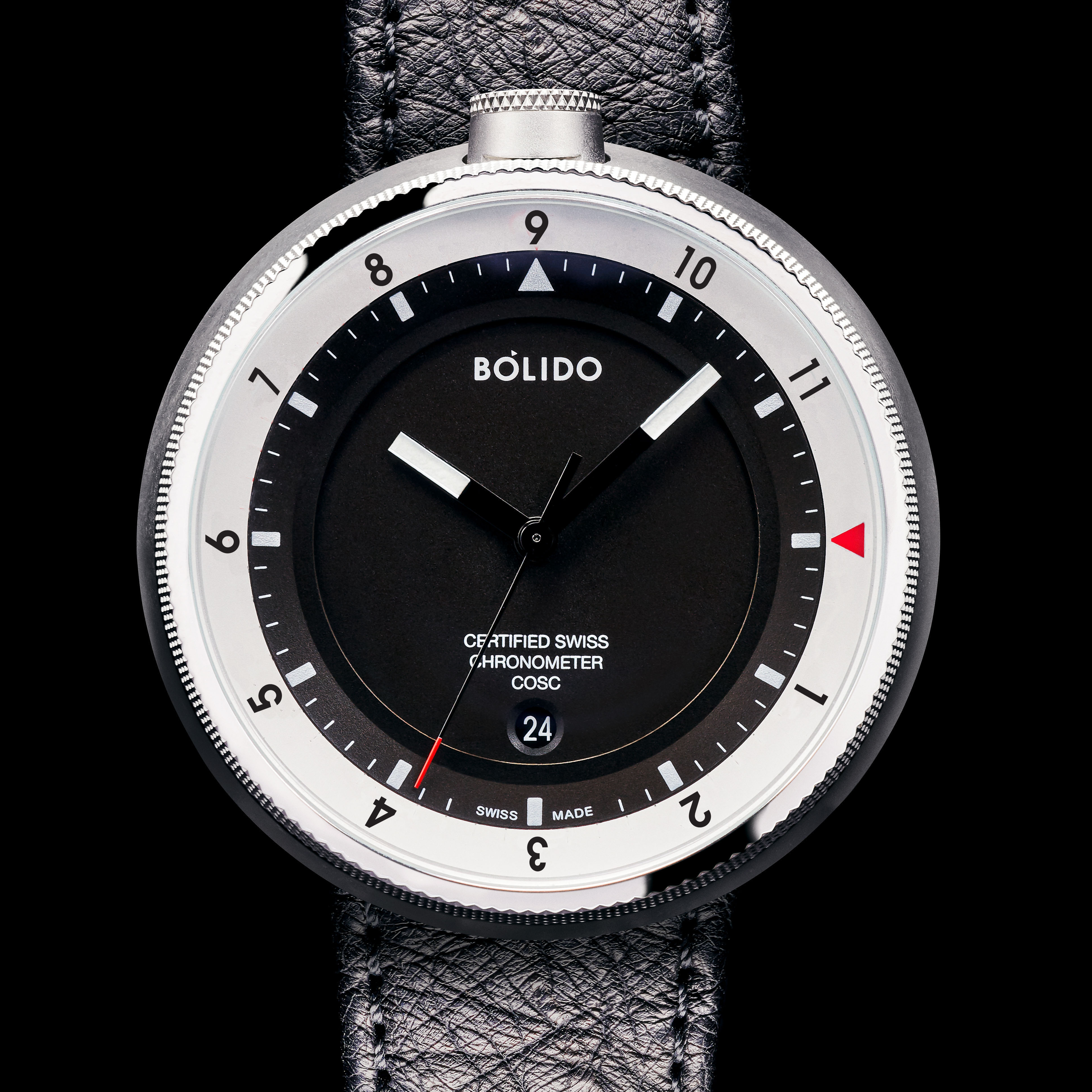 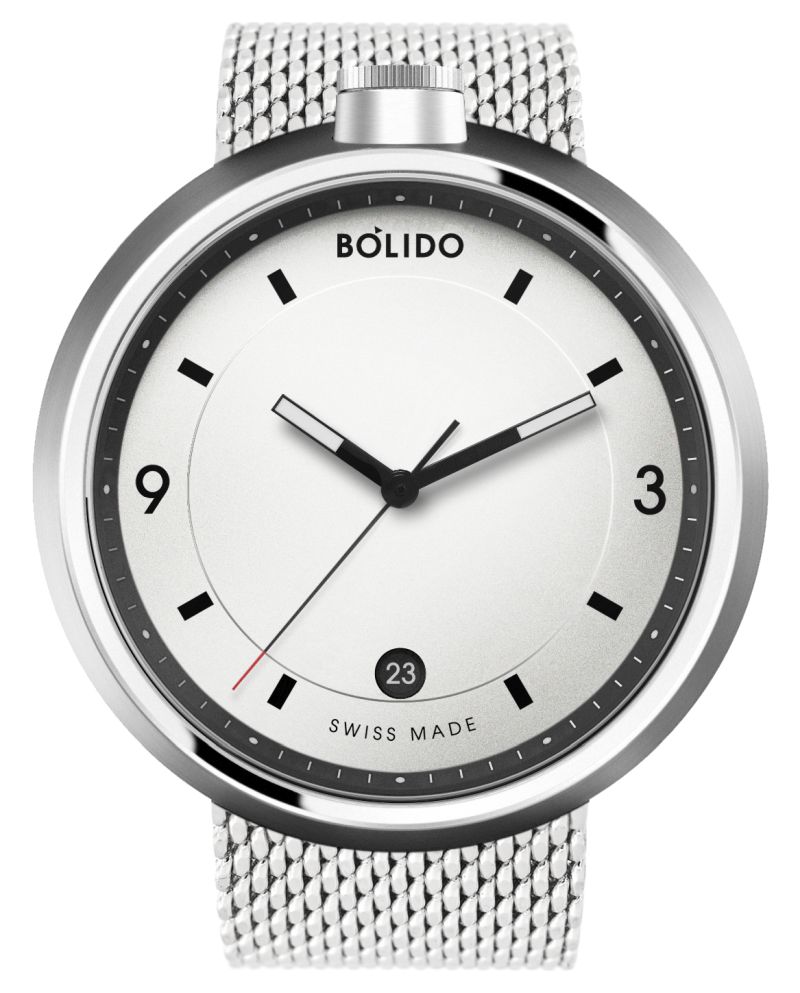 In consideration of the profound technical research for the archetypal architecture,
Bólido was bestowed the Red Dot Design Award.
The form allows efficient production using modern automatic lathes and in a
single operation. A second axis creates the characteristic inclination of the housing. The resulting asymmetrical height at 12 o’clock serves as a logical position for the large, easy-to-operate crown in a well-protected position. 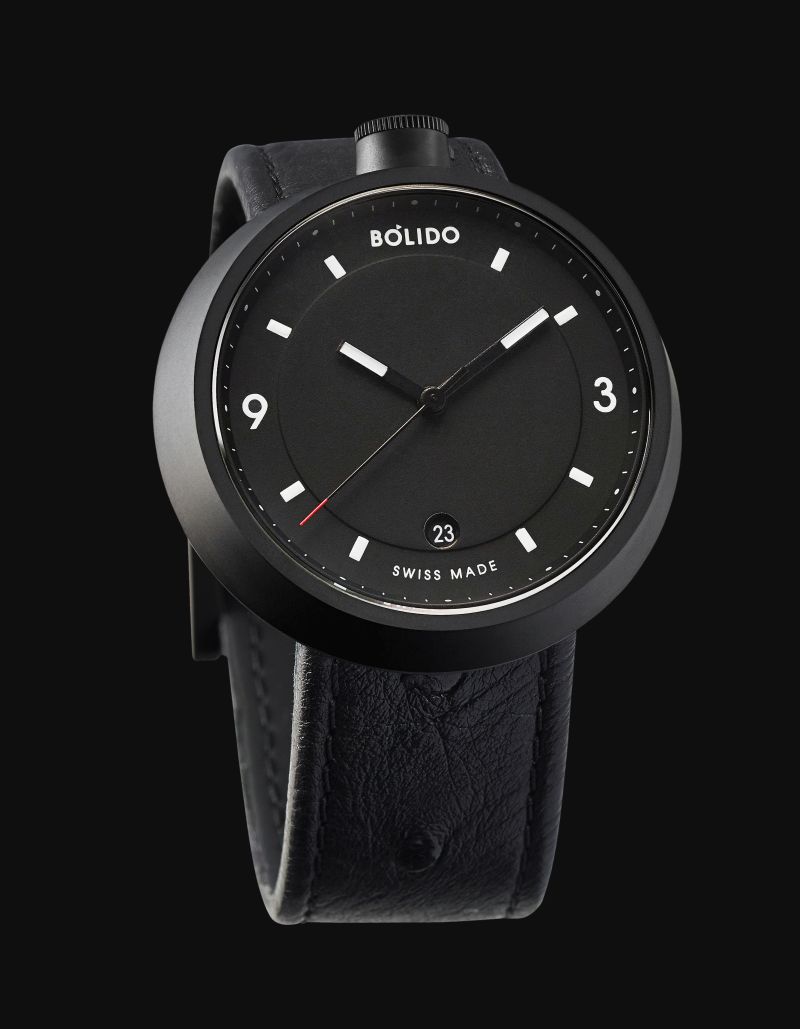 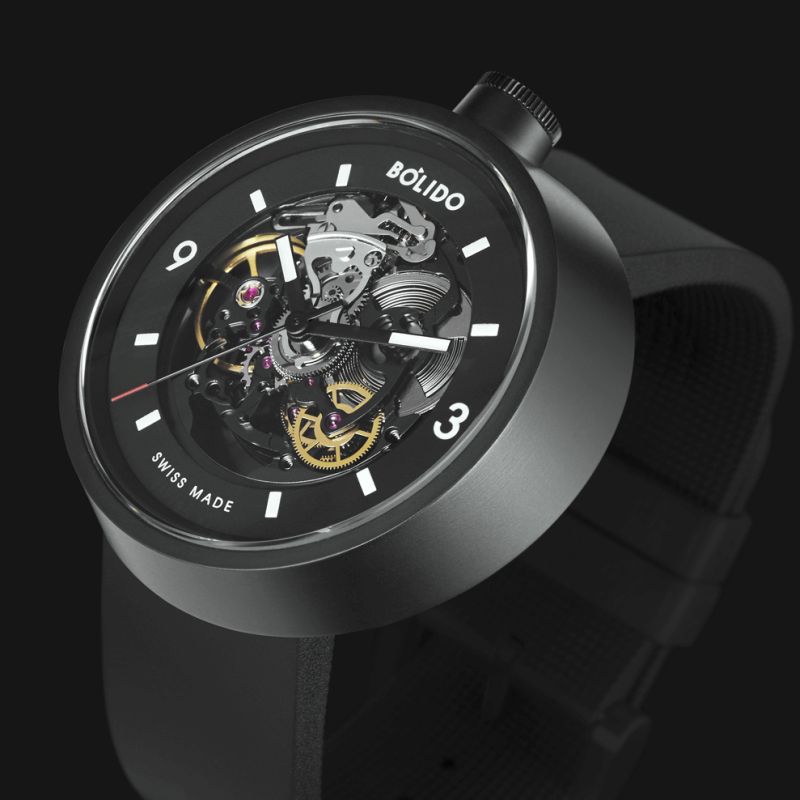 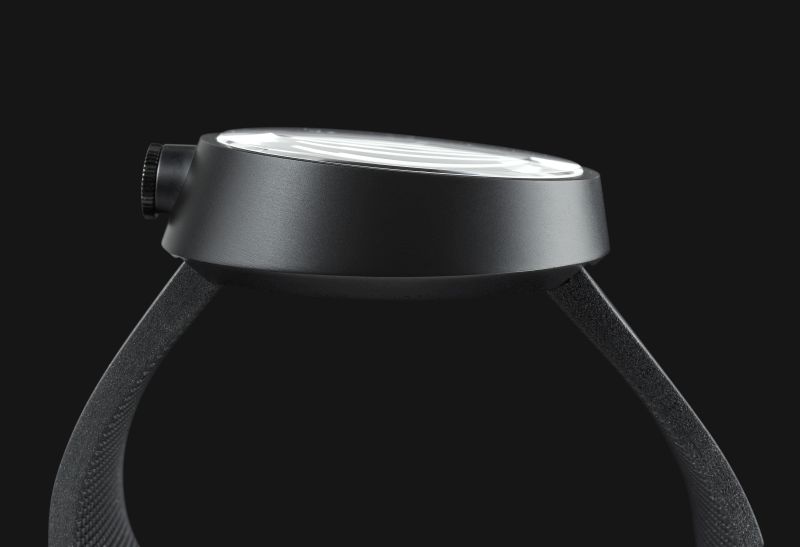 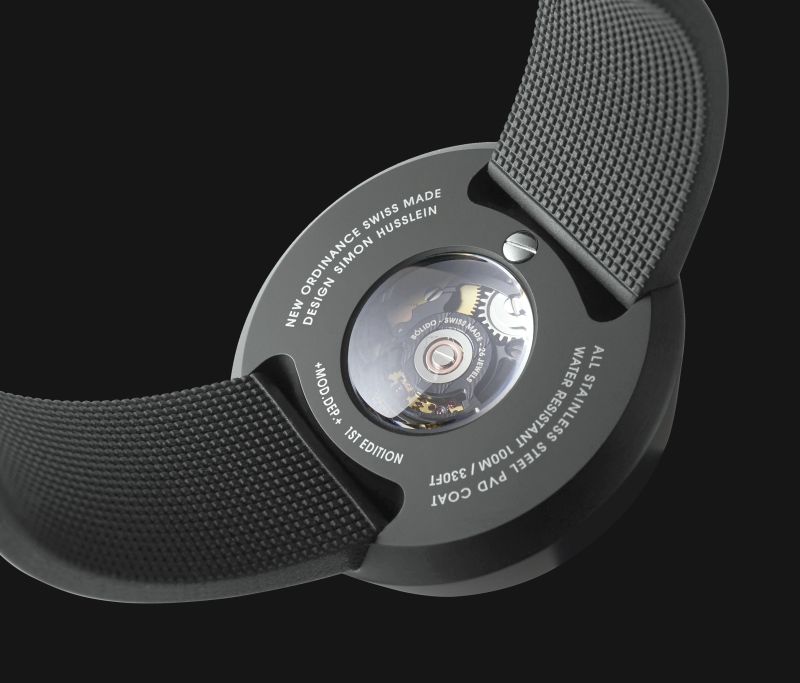 Use the innovative WatchMaker configurator to create your own personal Bólido from more than 400 possible combinations. Choose the shape of the case, steel finish or black PVD coating and from a large selection of attractive dials and bracelets.

Since both the classic Bólido and the slightly larger model Bólido X integrate the two band ends into the bottom of the case, the distance between them is considerably shortened. As a result, the watch sits comfortably on the wrist with the most varied arm sizes. 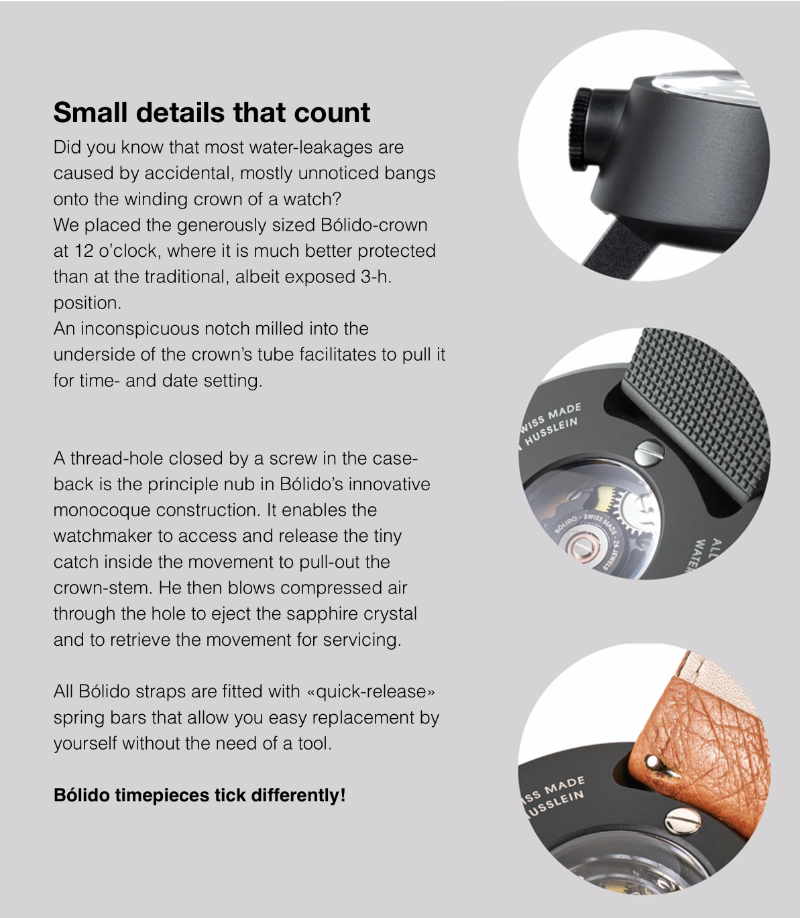 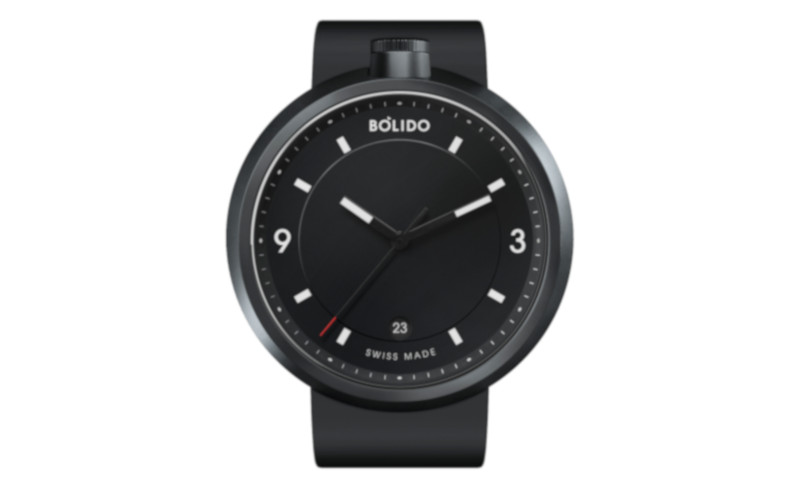 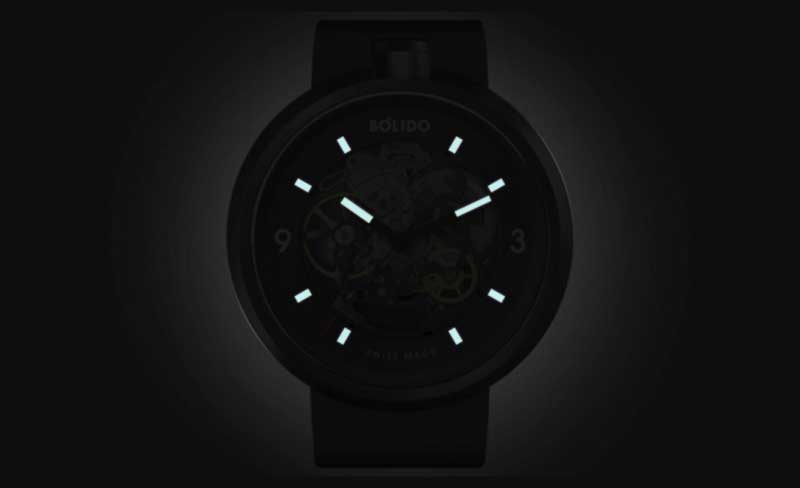 An entire book could be written about it! The self-winding engine is hand-assembled by highly skilled craftsmen and women in one of the most advanced facilities you can find in Switzerland.
There, the Bólido movements are built to our exacting specifications and regulated in 5 positions (instead of the usual 3); the meticulous finishing is underscored by Geneva stripes and engine-turned decoration.
A separate team of senior watchmakers dedicate themselves entirely to building the intricate skeleton version deployed in the Bólido CORE exclusively. 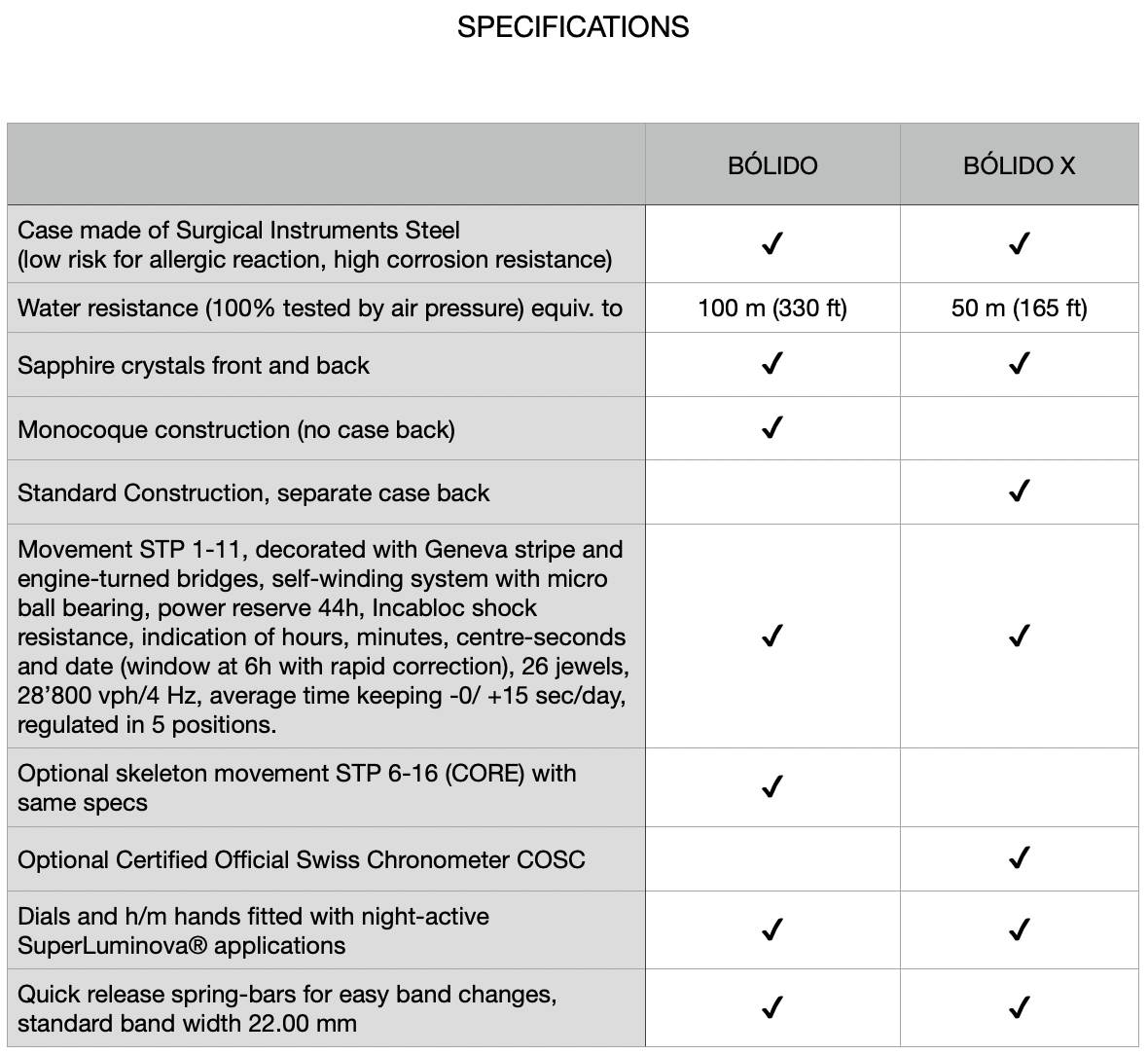 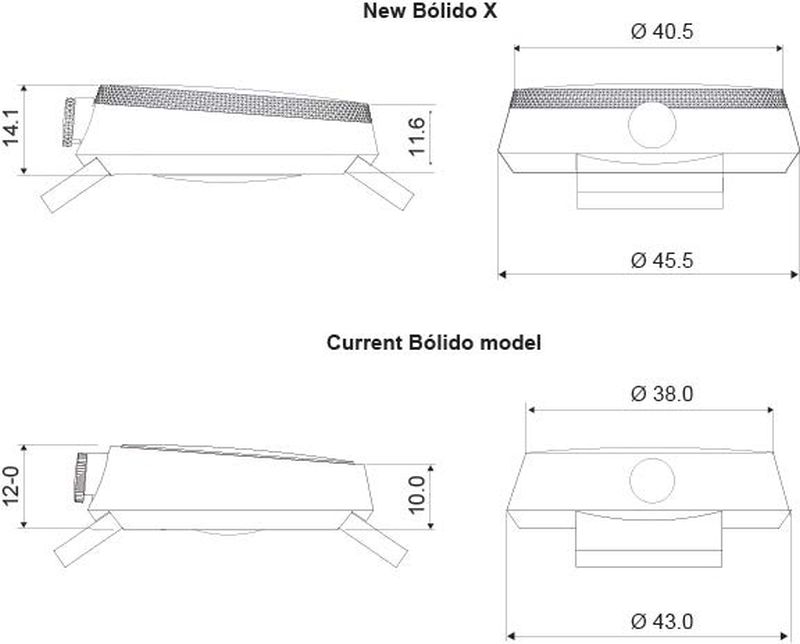 A mechanical timepiece is as good as its after-sales service! Without it, any warranty promise would be worthless.
Bólido Service Centers with highly skilled watch makers provide worldwide maintenance and repair in Switzerland, Germany (covering the EU), the USA and Japan; further service points are added when necessity
arises. Our two-year warranty is backed-up by an ample inventory of spare parts and covers all manufacturing faults and material defects. (For further details, see Service) 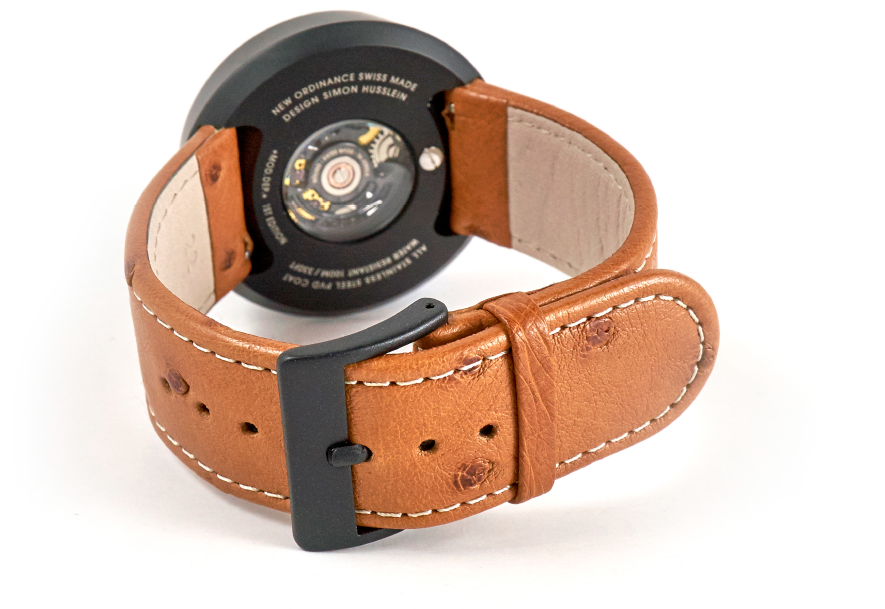 This is what independent media write
about Bólido: 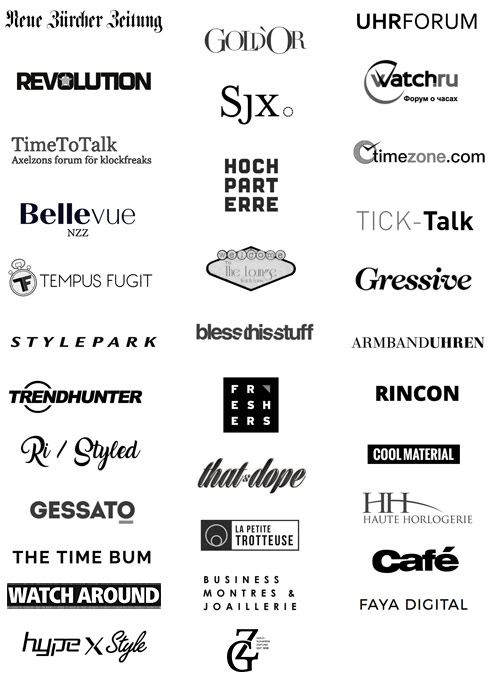